Members of the Mountain Rescue Association Honor Guard were invited to participate in the Final Reunion of the 10th Mountain Division held at the Marriott Tech Center in Denver, Colorado in August 2007.

The Saturday evening ceremony featured the Honor Guard performing along side the U.S. Army Color Guard in front of more than 1200 attendees. Guard members got a special treat when they were introduced to Abbey Kealey (producer and director of “The Last Ridge”). This documentary film was debuted in front of the entire audience. This truly was a memorable moment for each of us. 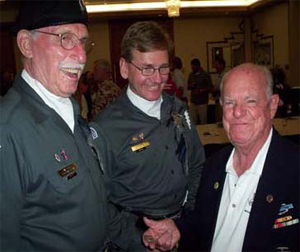 To have been invited to perform at this ceremony was one of the single biggest honors bestowed on the MRA-Honor Guard. The Guard was responsible for the Posting and Retiring of the colors for each of the receptions held throughout this 5-day event. The culmination was the Memorial Service held at the 10th Mountain’s winter training camp (Camp Hale) located atop the Tennessee Pass outside Leadville, CO. Despite the overcast, drizzle, and 10,000’ altitude, a large contingent of veterans, spouses, and descendants attended the memorial service led by the MRA-Honor Guard.

The MRA originated as a result of members of the 10th Mountain and National Ski Patrol getting together and wanted to establish a unique and high trained Mountain Rescue organization. Billed as the ‘Final Reunion’, the veterans have turned over all future reunions to descendants and volunteers. There is little doubt that the pride, determination, and courage these soldiers exhibited in the face of extreme conditions has certainly propagated itself into the pride, determination, and courage exhibited by every MRA team throughout the world.

To every Armed Forces member (currently serving, discharged, or deceased) – Thank You!