Abstract:
This technique is used in several instances. We will evaluate several of the most popular ice screw brands on the market, Petzl, Black Diamond, and Grivel. We will perform slow pull tests on a full spectrum of ice screw re-boring configurations based on proper level configuration. Based on our slow pull testing, we will perform further investigation with formal drop testing. We will also look at and report the strength of an Abalakov and its role by comparison.

Abstract:
We will measure the breaking strengths of common mid-line knots (bowline, in-line figure-of-eight, butterfly), tied in an interleaved fashion (i.e. tied simultaneously in parallel strands of rope) rather than in the interlocked fashion as is commonly done with the belay and main lines at the rescue/patient package connection. The mean breaking strengths of the interleaved knots and of the same knots tied in single strands of rope will be compared in order to determine if static system safety factor is appreciably different when using interleaved instead of interlocked knots at the main/belay line connection to the rescue/patient package. 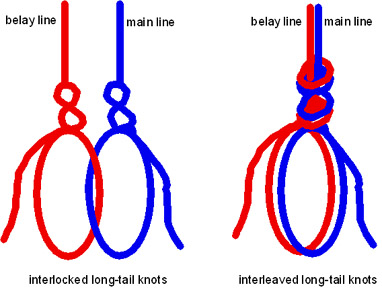 The tests will provide information about the forces involved in main line failure, and the system’s ability to survive. Tests will be repeated as necessary to achieve a statistically significant result. The data will be presented in Force vs. Time graphs along with a detailed description of the results and other relevant parameters from each scenario
[one_half padding=”0 10px 0 0″] 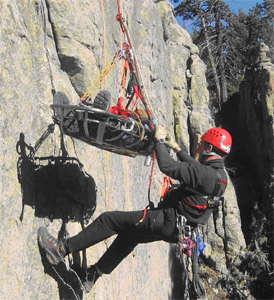 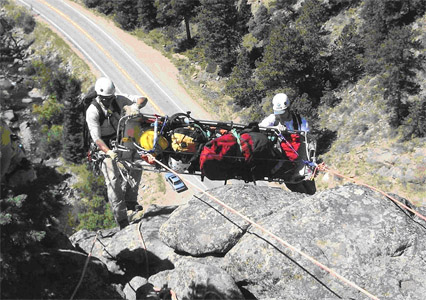 Abstract:
Multi-point anchors with removable artificial protection devices have been employed by many SAR teams for decades. Recenting studies testing multi-point anchors with slow-pull forces indicate that an individual leg of such an anchor could receive forces greater than 10kN. This force cesceeds the maximum force commonly allowed on a single piece of pro by many team’s safety procedures. 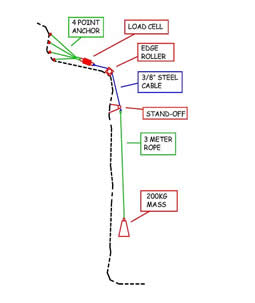 Our report and testing attempts to answer two questions:

We constructed ten different four-point pre-equalized pro anchors in rock above cliffs in the Joshua Tree National Park. The anchor points are connected by various types of commonly used cordage. A steel test mass of 200kg attached to 3 meters of 11mm “static” rope will be dropped one to three meters on each anchor, creating a fall factor ranging from about .33 to 1. A load cell is attached to the focal point of the anchor to record the total force generated on the anchor.

Our expectations are that these anchor systems will survive the force generated by fall factor drops of up to .6, which is greater than we believe possible during a real incident with a reasonably trained team. We also expect the force generated by such a fall will be significantly less than 20kN. The test results will not be conclusive. They will hopefully motivate further study, and will give SAR teams more information from which to evaluate their practices.

Abstract:
The project involves the design, construction, and testing of a manual cable lowering device. The project is a joint venture between RMRG and the University of Colorado Mechanical Engineering Department. The cable lowering system will have its niche in mountain rescues in fire zones where nylon rope may not be appropriate. It also has application to long descents where 3/16″ cable is often more manageable than nylon rope. The design process involves 3D CAD and finite element analysis. Manufacturing is both in house machining and contracted welding. Testing includes motorized wear testing in the lab, destructive pull testing of the frame, and outside field testing. 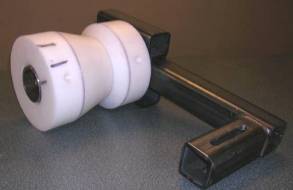 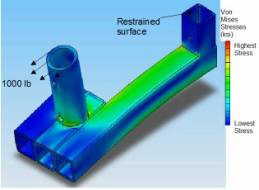 Abstract:
Extended rock climbing leader falls resulting from sequential anchor point failure has led to much speculation regarding rope behavior. It has been postulated that an increase in stiffness (modulus) of the rope was likely responsible for subsequent anchor failures after a top point anchor failure. Understanding and forecasting the system response of a leader fall can help climbers gain understanding of the risk of sequential failure of rock climbing protection.

A leader fall is more complicated to define than many initially thought. Changes in system stiffness due to knot tightening appear to be greater than changes in rope stiffness. A residual velocity after the initial anchor point failure results in an increased effective fall factor for subsequent impacts. For equally spaced anchors of equal strength, this increased effective fall factor makes sequential failure highly likely. 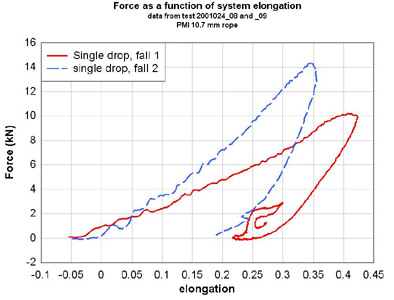 Other past grant awards are:

Abstract:
Roping glacier travelers together to safeguard against the potentially catastrophic consequence of a crevasse fall has been standard safety practice for decades. Being roped up, however, is not a guarantee against injury. Anecdotal evidence suggests that injuries sustained during roped crevasse falls are the result of striking the walls, obstructions, or “corking” in a constriction. In addition to using proper glacier travel techniques and effective self arrest, the question has been raised: Would the use of low-stretch ropes be a better alternative than high-stretch ropes to limit the length of a crevasse fall and thereby decrease the possibility of injury?
To answer this question, a study was conducted to collect comparative rope-stretch data between small diameter, low- and high-stretch ropes, and large diameter, low- and high- stretch ropes (see note). The study also recorded impact forces at the test mass and the arresting anchor. The test method simulated glacier travel situations. A full 25 meters of rope was deployed for each test, and test masses of 100kg (which approximates the weight of a traveler and pack) and 118kg (which approximates the weight of a traveler, pack, and sled) were used. In total, 21 drop tests were conducted.

Preliminary results point toward low-stretch, small-diameter ropes as an alternative to the traditional use of high-stretch ropes for safely limiting the length of crevasse falls and thereby reducing the probability of injury. 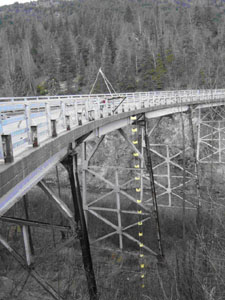 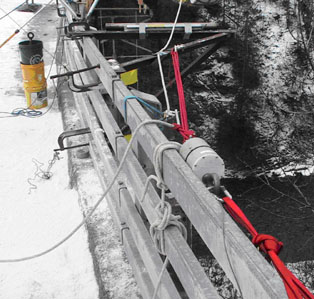 Abstract:
Like most teams, DCSAR has many tech geeks, engineers, climbers, wackos and others who want to break things or are paranoid about equipment failure. Accreditation got these members thinking about testing. Tests selected were:
Failure testing of ropes
Brake tube braking (wraps vs. load)
Tandem vs. single prusik
Inline forces on uphaul / lowering system
Rope strength reduction caused by bend around carabiner.
A member’s rope and climbing rack that survived a condo fire (exposed to smoke only), and other old rope and softgoods. 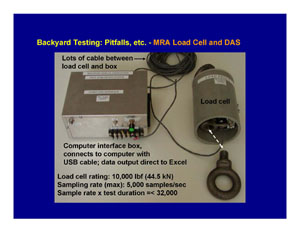 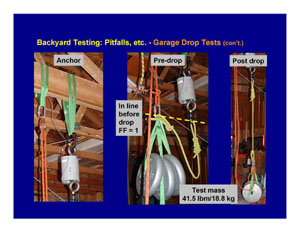 More papers and data on technical rescue systems testing and analysis from ITRS and other sources are available at jrre.org